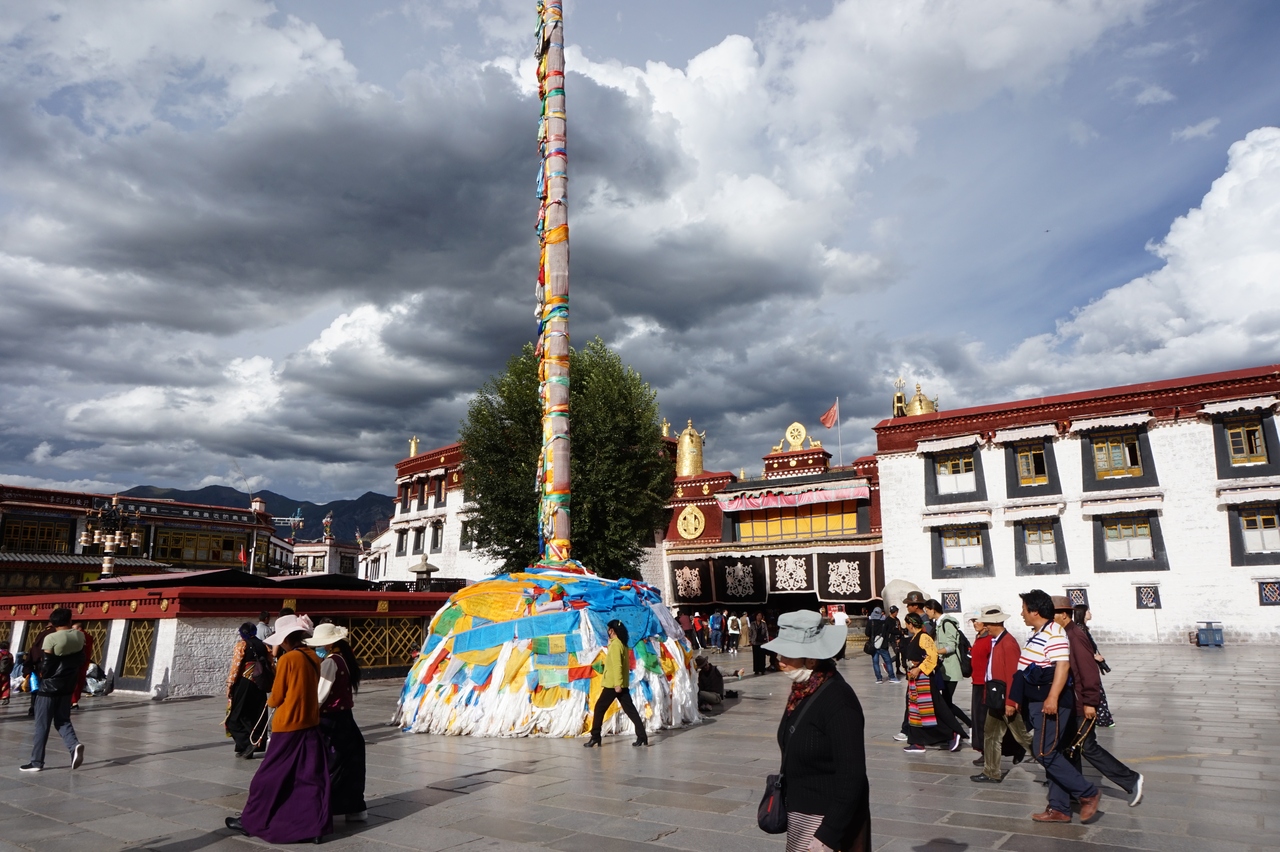 As a foreigner, you cannot move freely around Tibet. You need a tour guide and a car. Plus you need a special permit, which takes around 15-20 days to obtain. Honestly speaking, most of the travel agencies are similarly expensive and offer a relatively similar program.

I traveled with Explore Tibet https://www.exploretibet.com , and I was quite pleased with them. I had a great driver, who was driving extremely carefully and didn’t break any rules, which haven’t happened to me before in China. I especially appreciated it on steep serpentines which lead towards mountain passes. And our tour guide had a pretty good level of English, and he managed to explain a very well complex history of Tibet, including sensitive topics from the past years.

Be prepared for a police check points everywhere and Chinese flags. I have been living in China for one and a half year, and I haven’t seen that many Chinese flags in this time as I saw in one week in Tibet. It did not change my experience, and honestly, if you wish to visit Tibet, it`s better to go sooner, as it’s radically changing. Still, I would recommend it as one of the most beautiful and inspiring places I have visited so far.

In my case worked the best eating chocolate and high carbs food. Normally I try to avoid eating extra sugar, but having one small chocolate bar or snickers per day when I felt dizzy helped me a lot. And on the second day, I got too much sun and took Citramon – Russian miraculous medicine against hangover or a headache. When I slept the first night in 5100, I took one ibuprofen, but I didn’t get a headache. Just felt like being tipsy with very light head. I feel dizzy often in a regular altitude, so I wasn’t clumsier than usually.

The often recommended pills are Diamox – I haven’t tried, as my altitude sickness was very light and let’s face it, who wouldn’t prefer chocolate to medicine. But I heard about many adverse side effects.

The best way to prevent altitude sickness is to ascend slowly and follow the basic principle “climb high, sleep low.” I read on many travel guides that the best is to take a train from Xining to Lhasa. However it is an overnight train, hard to get a soft bed, so you end up in the open compartment, plus it won’t significantly help the adjustment process as the cabin is under pressure with the extra pumping of oxygen. I flew into Lhasa directly, and I am happy with this decision. I felt my heart beating bit quicker than usually with every slightly more demanding activity.

If you like meat and you are visiting Tibet, you should definitely try yak meat in any form. One of the most popular foods among Tibetans dumplings called momos, they are fried with oily taste, similar to those you can get in Shanghai. The good news that unlike in China I haven’t seen that many veggie dishes with hidden meat.

My favorite dishes were yak yogurt and a wide variety of Tibetan bread and noodle soups.

Their traditional breakfast is Tsampa – made from barley, mixed with black tea, and sugar or cheese. It has a very distinct taste but definitely worth trying it.

Butter tea is a traditional beverage in Tibet. It is a black tea, with milk from yak, salt, and butter. It tastes more like soup, but it’s great for pain in your throat, and in my case, it helped me to get better adjusted to the high altitude.

Potala Palace, the cardinal landmark of Tibet and the masterpiece of Tibetan architecture, it was first built by 33rd King Songtsen Gangpo in the 7th century and later in 17th century rebuilt by 5th Dalai Lama, since then it was home to the Dalai Lama and his government.

Jokhang Temple in the center of the Old Lhasa city. Jokhang temple is one of the most sacred temples in all over Tibet, and it is always bustling with earnest local pilgrims since from early days.

Walk around the Bakhor street which is the one of the most devotional circuit as well as the crowded central market of Lhasa, during the old days it is the most famous local market, but now it is changed to a tourist gift shopping center.

Once the world’s largest monastery that housed for more than 10,000 monks, it was a resident of the Dalai Lama before the Potala Palace. Even though several destructions were taken place in different time but still you have lots of things to see by walking through numbers of the narrow and twisted lane through the monk’s apartments is thrilling.

Kampa la pass (4700m), from there you will be amazed by the breathtaking glimpse of the holy Yamdrok lake with its turquoise color

Tashi Lhunpo monastery in Shigatse was built by the 1st Dalai Lama-Gedun Drup in 1447. Later it became the seat of the Panchen Lama lineages.